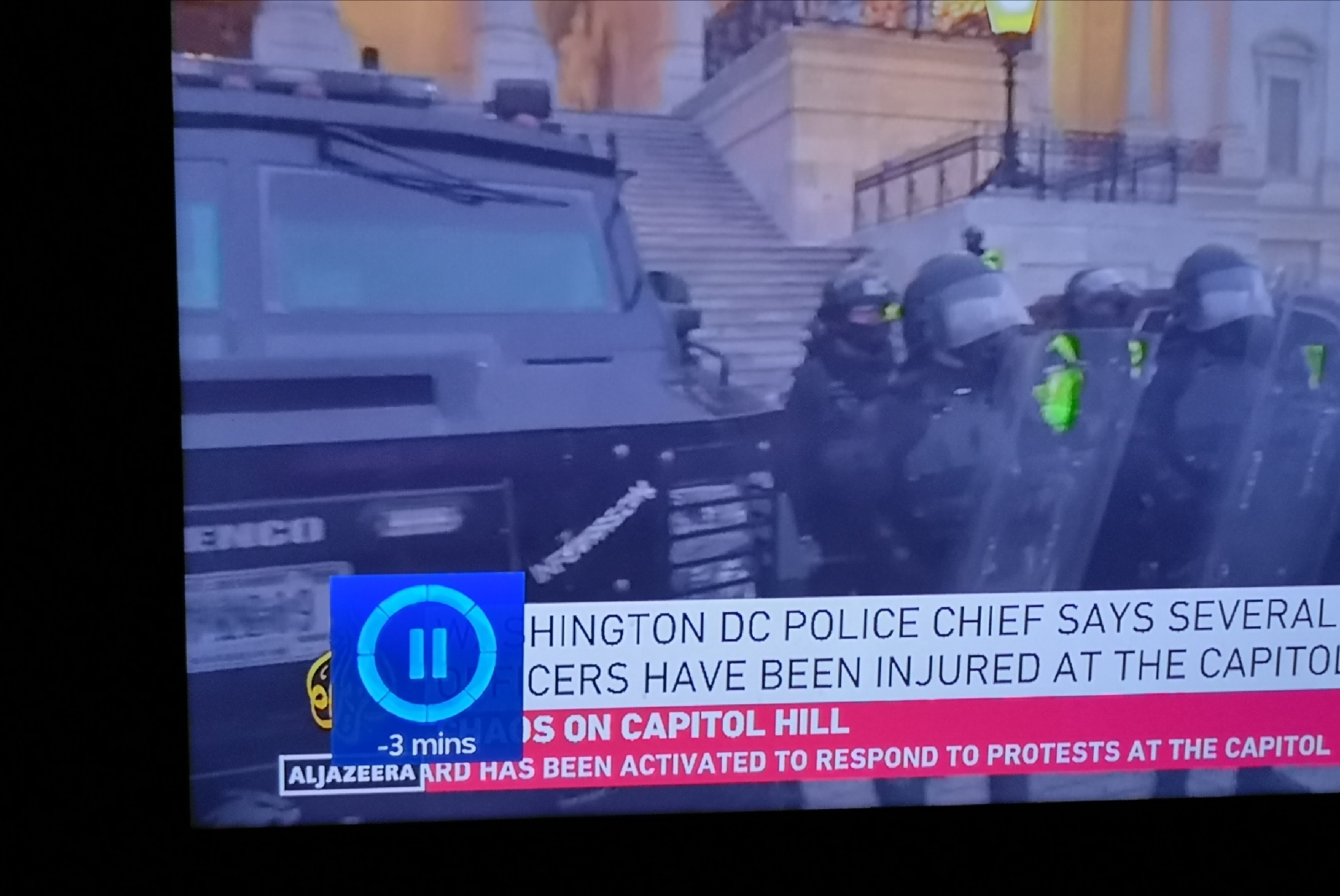 Last night something intolerable happened.  The white supremacist, fascist core of Trump and Putin's US millitia's ran an organised protest with Police complicity. That ended with protestors and extremist militants having the run of Capitol Hill and the Congress building.   Disrupting the Electrol vote count to officially make Joe Biden President at the request of a significant majority of US citizens. In any other country this would have been called an attempted coup . This could have been that if there had been popular support and that was Trump's intention. To show they could if they wanted.  The game plan of the global fascist movement is to destroy Democracy in the USA. Ironically (🤦‍♂️) David Icke has laid down the plan clearly and concisely.  The narrative of neo fascism is many pronged from simple fear of socialist authorianism and fear of losing ones identity as a 'strong man: that Jordan Peterson promotes; right through to Qanon ideas
Post a comment
Read more

- November 17, 2019
There is sometimes an us and them. The Conservative Party with very little constraint set themselves up to represent the ruling classes, they are without doubt the administrators for the super rich and with very few exceptions they will choose capital over people.  We all know this. The Tory party itself was formed to protect the interests of the Royals and Landowners during the English civil war. There is no culture of responsibility to anyone other than the powerful. This last four years have reflected that deeply.  With the referendum to leave the EU, turned into a cereal brexit that was all anti-immigration, instead of a debate about neo political theory. With Trump winning the US presidency; we saw the far right became mainstream and the Conservative Party jump right on that bandwagon. We saw how much apathy and fear had overcome hope in regards to politics. On the left we had Jeremy Corbyn winning two Labour party leadership elections and almost landing himself i
Post a comment
Read more

The Good the Bad and the Beautiful

- November 14, 2019
The Good, the Bad and the Beautiful It's not like it used to be I hear. Maybe not. I've never been before. For reasons unsaid or unknown the eco warriors had a lot of drop outs. Sweet, I thought a chance to get into boomtown before it loses all its charm.  I'd heard so much about Boomtown. Whispers then roars. Finally, I made it past my indifference to extremities and waste and thought fuck it. Aware of the dangers. No drugs testing, overzealous security and a minor exodus as a result; I threw caution to the wind and paid my deposit. I made my way to the site.  Through a nest of yellow jackets and a disinterested sniffer dog I passed. Into the wilds.  Into the echos and hills. Where tents rolled into constructs of pure metallic, engenic beauty; and bass ingratiated itself into me. Glad to be working and looking forward to a good excuse to make new friends. I set up and slept ready for the next day and my party to begin. My role. Eco warrior. A
Post a comment
Read more

Pathological Voting for the Win

- June 07, 2017
On the 12th December 2019, Great Britain will vote for its government. Which Party will lead us and which representatives will govern and policy our lives. For many years many of us have sat this process out. My first vote was after the 1997 General Election, in the 1998 European Elections, I voted Green and Labour, unsure, even of who, I was voting to place in this vital position that is soon to be obsolete for us Brits. I didn't vote again until 2016 for Sadiq Khan in the Mayoral Election. My main reason for this was apathy. Apathy at the system, at myself, at the whole thing. After Tony Blair blagged his way into number 10, it became very clear, very quickly that is was business as usual and my future as part of the farm was secured. I could work in call centre, be a teacher, work for the civil service or the council. Just be a good lower middle class boy, just how we trained you. This is a song I've never wanted to sing, so I said fuck you to everything and turned to
Post a comment
Read more

- December 09, 2015
We went to be free, like you. We drink coffee by Colosseums and Roman roads. Chatting by text on our Iphones. A once beautiful country with secrets in its archaeology, I could be in Iraq, Syria, Libya, Egypt or Palestine. Once I was a plasterer then I picked up arms, now I lead men through steel storms crying Tripoli or Die. The first man I shot got hit between his eyes his head exploded from behind. I was surprised that life was so easy to take and went on with the business of reaching Tripoli or the blackness of death. We made our goal, with the help of American bombs. Which left our country in ruins, now war seems endless. I managed to escape to Italy, I sit in a coffee shop sipping an espresso with my family. Across the sea from me the middle east is burning The med is one side paradise and one side hell. A sea that separates secular democracy, civil war and budding religious theocra
Post a comment
Read more

- November 23, 2015
Nuclear weapons deter war.  A statement that gets used a lot, is it true though? At best it is questionable, at worst its an outright falsehood. The fact that the powers have been using nuclear weapons in the form of Depleted Uranium : cannon shot the size of most peoples forearms made totally from uranium, that explodes on impact, penetrating artillery, tanks, buildings and troop transports, making anything it hits explode, leaving an aftermath of radioactive dust that causes death and radiation poisoning: since before the first Gulf War and in every conflict onwards, in my opinion, nullifies that statement. ' Whooaa there ,' I hear those amongst you who support nuclear detterence declare. ' What about the prolonged peace between NATO and the USSR? ' Ok, let's explore that, the theory goes, after WW2 if we didn't have nukes; then Russia invades the whole of Europe. In the face of two world wars, the second wiping 20,000,000 Russians off the planet, 6,
Post a comment
Read more

Addicted to Freedom, the poltics of getting high

- April 15, 2015
Gabor Mate posited that 'the idea that drugs are addictive is absurd.'  At one time I would have found this absurd, but now I can live with the contradictions this brings up in myself. I've had many drug experiences, from the abusive and scary to the euphoric and mind expanding. Why do I agree with Gabor Mate if I had abusive experiences with drugs, that looked and felt like addiction? I can only answer that question subjectively. My initial experience with marijuana was incredible. I was rushing my head off to the sound of Winks Higher State . I felt like I was having a religious experience.  My first experience with Alcohol was unpleasant, I did what any good aspiring drinker does, I built up a tolerance and slowly watched my life deteriorate, I took stimulants to drink more, than opiates to drink less and nicotine was a constant. I stopped weed because it seemingly exasperated my anxiety, which was one of the main emotions I self medicated against.  Eventually my
Post a comment
Read more
More posts